For the previous report click here: To the top of the world by locomotive: Part 1

Video of this segment is below, there will be links throughout the page to go to specific points within the video.

After the southbound train cleared it was back up the mountain, the combination of an hour of idling and the high altitude led to a spectacular show as our GE shot black clouds of smoke and fire into the sky as we struggled to get moving up the steep grades again. While the section from San Bartolome was very scenic the terrain becomes even more rugged as leave Matucana behind, The arid desert scenery transforms in to rugged mountains with sheer rock walls lining the track as we climb along the Rimac River.

Shortly after crossing the bridge we stopped at Lastre Viso siding for an unexpected crew change, rather surprising that it would happen at this remote spot rather than at the yard in Matucana.

With the new crew on board we continue up the hill a short distance to the first switchback at Viso. Viso is the first true switchback on the line and is probably the most photographed as it is right along the Carr Central and with some hiking it is possible to get all 3 levels in one shot. We were amazed with how quickly the 3 person crew completed the tricky switchback maneuver, the only delay being for the brakero and hefe to get back to the head end at the top of the switchback. As we pulled away we were treated to some signature C39-8 flaming exhaust, the altitude and grades no doubt bringing out this natural characteristic in full. Video 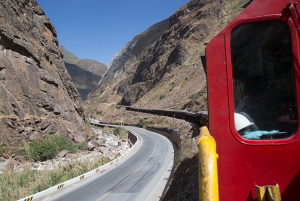 After the short but scenic ## kilometer run from Viso we arrived at the next switchback, Tamboraque. We pulled to a stop infront of the old station and our engineer got out to check the fuel levels, an old tankcar now serves as a remote refueling station for trains ascending the mountain. With the small 1300 gallon fuel tanks the crew must be careful not to run out of fuel as there are few places to refuel on the road. Our train was too long for the tail track at Tamboraque so we spent a few extra minutes here doubling the train before shoving the the steep switchback. Video

At the top of the switchback both the middle and upper sections pass through a outcropping in parallel tunnels making for a very interesting scene. As as Viso the brakero and hefe had to walk back to the front of the train giving us some time for photos.

After traversing the switchback we pass high above the town of San Mateo where we will spend the night a few hours later. The railroad has a short siding here that is often used for meets.

Thats it for Part 2! In the next segment we will cross the famous Inferillo bridge and traverse two more switchbacks before ending up in the mining town of Casapalanca.