Special thanks to Peru Rail and staff for accommodating our special requests and for the incredible hospitality throughout our travels. Please visit Perurail.com for the best best way to travel from Cusco to Machu Picchu!

After several month staying close to home and saving money it was time to leave for what would be the trip of a lifetime, Peru!

As usual with my trips the first days would be a non stop deathmarch to reach the first destination. The plan was to fly to Lima where I would meet up with my travel partner Doug Koontz, spend the night in the airport, depart Lima at the crack of dawn and then immediately get on the train to Machu Picchu upon reaching Cusco. This would maximize our time and allow us to acclimatize at the 7000 ft in Aguas Caliente versus 11,000 in Cusco but would definitely make for a rough first day. At 1500 I left my office in Atlanta and headed to Hartsfield Jackson, as usual I left too early and arrived with plenty of time to wander the terminal before my flight, Delta 151 to Lima.

After watching the Atlanta suburbs fade into the clouds I settled in to get as much sleep as possible knowing that I would not have the chance for quite some time once I reached Lima. The flight was quite turbulent but I managed some sleep anyhow before arriving in Lima shortly before midnight.

Immigration went very smoothly, Peru is a very open country that depends on tourism for a substantial part of its economy so there was nothing more than a entry stamp required. Doug’s flight via Panama was due in an hour after mine so after collecting my bag I found a spot to camp in the baggage claim hall and wait. There are no chairs nor electric outlets here so beware if you plan the same! Finally Doug arrived and we proceeded to the domestic terminal, which is adjacent to the international terminal. We checked in for our flight, LAN 2005 to Cusco then headed upstairs to attempt to withdraw some money and get food. The ATM’s at the Lima airport are mostly out of date and will not accept debit cards with chip technology. The only one that would work was the GlobalNet ATM with a 18 soles fee and a 400 soles withdrawal limit, but it gets better….the machine will also eat your card if you make even the slightest delay retrieving it! Thankfully through my limited Spanish and gestures I was able to find someone with a key to open the machine, first disaster narrowly averted and I had only been on the ground for 2 hours!

Once I had gotten my meager sum of Peruvian soles and retrieved my card we headed through security to the gate. Doug used the time to catch some sleep while I charged my phone and went to retrieve my train tickets from the PeruRail desk which is located inside the concourse. Sleeping in this airport is not an easy task however….while very clean and safe it is also very loud! The airport does not make departure announcements over the PA, instead they make continuous announcements about not making announcements!

By the time I got on board our 0510 flight to Cusco I was dead tired and sat down and passed out for most our short flight. Luckily I awoke just in time to see the spectacular landing in Cusco. Cusco is one of the most challenging airports in the world and planes must circle over the city then descend through a narrow valley, thankfully the weather was good today and the landing went smoothly. That would not be the case later in the trip…..

Immediately once you step off the plane the altitude hits you, thankfully there was a basket of free Coca leaves welcoming you, I grabbed a few and they made a noticeable difference. Doug being subject to drug testing by the railroad however had to suffer through it. Once we collected our bags we met our pre arranged taxi outside and headed off through the streets of Cusco towards the PeruRail station in Poroy.

We used TaxiDatum and were very happy with the service, it was 40 soles (USD 15) from the airport to Poroy.

PeruRail trains once departed from Cusco San Pedro in the heart of the city but unfortunately today they depart from Poroy, about 7 miles outside the city to avoid a series of switchbacks and reverse curves that added another hour into the journey time. While its easy to understand the decision its a shame passengers do not get to enjoy this fascinating segment.

We arrived just too late to photograph Vistadome 31 and pulled up just in time to see ALCO DL535 482 pull away. We knew Tren Local, the locals only train from Cusco to Aguast Caliente would be passing through shortly so we found our way outside the station walls and set up at a pedestrian crossing. Not long after EMD G12 #510 rumbled through with two boxcars of supplies for Aguas Caliente and one coach. The town of Aguas Caliente relies on the railway for most inbound material, from food to construction supplies and the local trains typically have atleast one boxcar in consist. 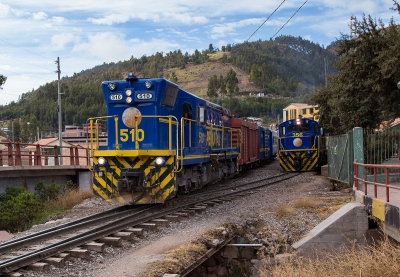 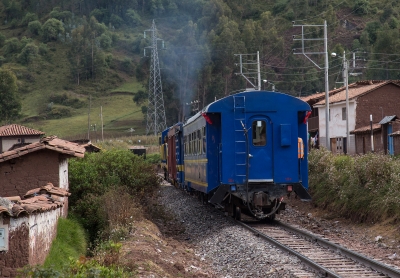 Our journey on Vistadome 203 from Poroy to to the footsteps of Machu Picchu at Aguas Caliente will take approximately 4 hours. We will travel 93 KMs (57 miles) from an altitude of literally breathtaking altitude of 11437.01 in Poroy to 6686 feet in Aguas Caliente.

After photographing Tren Local we headed back inside and checked in for our journey. The station is built in traditional railway style with exposed wood ceiling joists, ornate wooden benches and plenty of natural lighting, very well done for a modern structure, there is also a restaurant inside but we did not have a chance to eat, thankfully PeruRail would feed us well on the trip. Trains typically begin boarding around 20 minutes before departure and at 8:05 we walked out onto the platform to our coach. Before we got settled though one of the staff members approached us and offered us seats in the rear coach which would be empty up till Ollantytambo. I had been in contact with the railway about our trip and the company was very gracious to us throughout our journey. The empty car made for a great journey as we had space to unwind from our long plane ride and make use of the small opening windows for better photo angles. 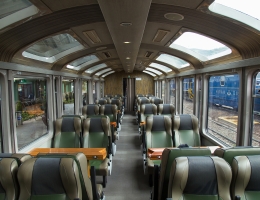 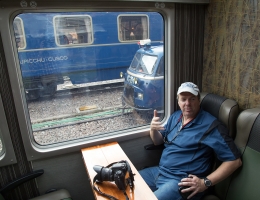 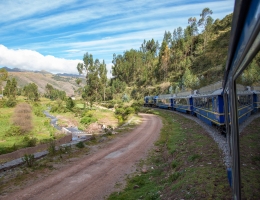 The trips begins through the rolling plains between Poroy and Pachar, the sun is now out brightly highlighting the verdant landscape, still green from the rainy season. Low clouds hang over some of the mountains enhancing the already amazing landscape.

Our carhosts, Joshua C. and Hury M. set the tablemats for breakfast. These mats are woven by the local people in the town of Pachar under the “Warmi Away” program that PeruRail sponsors. More information about the program can be found at the video below.

At Izcuchaca the tracks pass straight through the center of town where a outdoor market has been set up just feet from the tracks. Our Brakero keeps a close eye on the train as people, cars and rickshaws dart around trying to get around the train. Shortly after passing through town breakfast was served, a tasty breakfast sandwhich, brownie for desert and of course Coca tea to drink as I was doing my best to avoid altitude sickness! 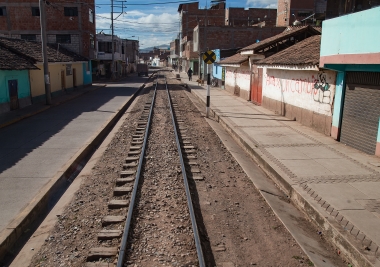 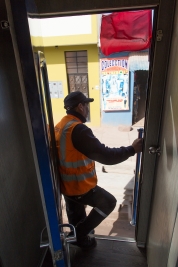 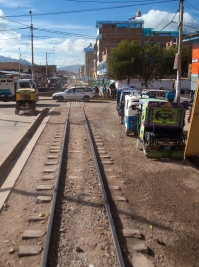 After passing through Huarocondo the terrain transitions from rolling farmfields to pine scrub and rugged rock formations as we enter the Pachar River Gorge, the track gradient steepens and flanges and brakeshoes squeel as we make a rapid descend down the curving alignment. 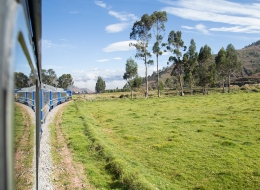 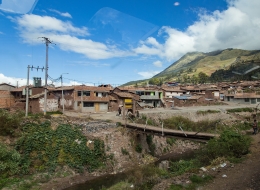 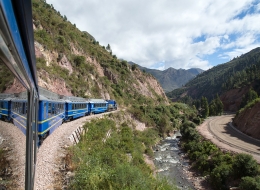 The only switchback traversed by regular tourist trains is located at KM 48 deep in the Pachar River Gorge, the train has a front and rear brakero and the whole process is completed with amazing speed that would be unheard of on most US railroads. The hillsides above the river bear witness to the unstable geography with evidence of recent landslides. This section of the line is closed to all passenger trains during the rainy season because of this with all trains originating in Ollantytambo.

At Pachar we exit the gorge and come to the wye and junction with the Urubamba branch which only see’s a few DMU trains a day. PeruRail also operates a small servicing facility here where locomotives in the Ollantytambo-Aguas Caliente pool receive fuel and running repairs. On the high rock face above a series of strange dwellings can be seen attached to the cliffside, these pods are actually hotel rooms that can only be reached via rockclimbing! For more information visit the Skylodge Adventure Suites website. (http://naturavive.com/web/ ) Not long after the line crosses the Urubamba River which it will follow all the way to lines terminus in Hidroelectrica. 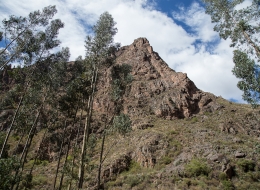 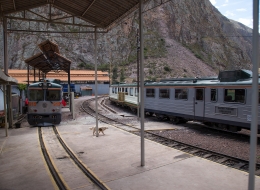 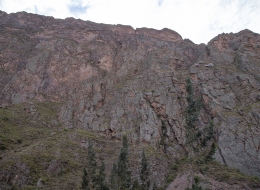 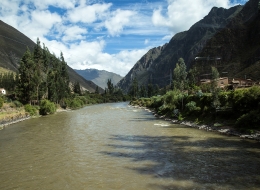 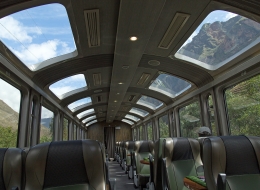 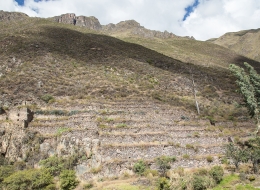 At Ollantytambo we make a brief stop and we get a chance to stretch our legs and admire our little blue ALCO as it rests with the rugged mountains in the background. Here the train fills up as many tourists choose to travel to Ollantytambo by car so they can see the other ruins in the Sacred Valley, something we would do later in the trip.

From the Ollantytambo on the scenery goes from nice to spectacular, the Urubamba river changes from the wide calm river at Pachar to raging whitewater by the time we reach KM 82, the last road access and the beginning of the Inka Trail. From here on the railroad and the Inka trail are the only two routes through the gorge. The mountains rise up on both sides to incredible heights and the vegetation changes from the high altitude pines to a rainforest like environment. At a lonely spot named Pampacahua (KM 93.74) we stopped to meet a eastbound DMU, we desperately wanted to get down for a photo of our train at this fantastic location but we wouldnt have had a chance even if allowed. The train crews here waste no time, our train was already back on the move before the DMU had even passed us in the rear car. If one had no time constraints and alot of determination there is no doubt that there would be some amazing photo locations in this segment. 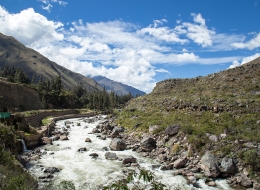 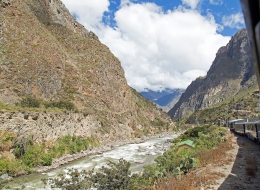 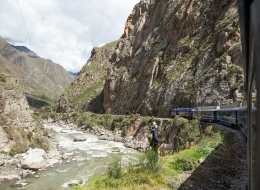 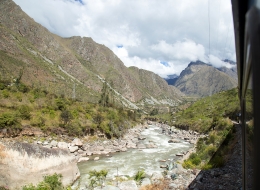 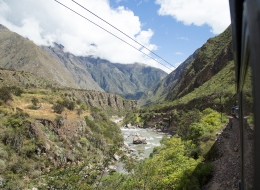 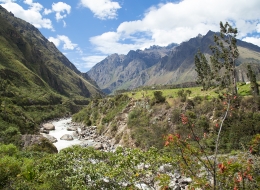 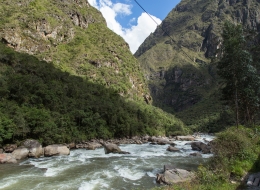 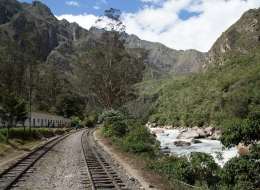 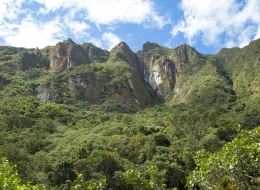 Right on time at 1211 we roll into the station at Aguas Caliente on the footsteps of Machu Picchu, a fantastic journey but we still had plenty to do. When this story is continued we will take a look at the fascinating PeruRail operations around Aguas Caliente featuring tunnels, streetrunning and of course the vintage ALCO’s and EMD’s. Later of course we will visit the famed ruins at Machu Picchu but that was still a long day away.